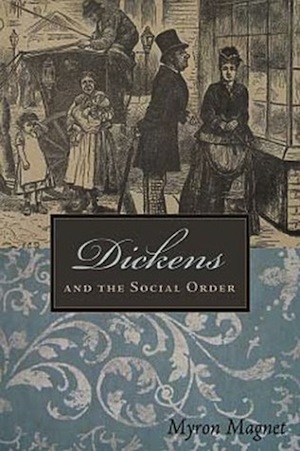 “One of the most stimulating studies of Dickens to have appeared in recent years.” — New York Times

Myron Magnet’s groundbreaking study of Charles Dickens’s early novels shows that the liberal reformism for which Dickens is so well known rested on a surprisingly traditional view of society.

Magnet writes, “The four great but relatively neglected works I discuss in Dickens and the Social Order … add up to what for another writer would constitute a magnificent life’s work in itself, a tour de force that is like a university education in psychology, political theory, comparative political science, cultural anthropology, sociology, history, philosophy, and more — all transfigured and illuminated by the genius of the writer rightly said to be Inimitable, so that the reader can hardly believe that anything so full of pleasure can also be so full of wisdom.” END_OF_DOCUMENT_TOKEN_TO_BE_REPLACED