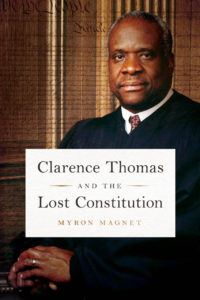 When Clarence Thomas joined the Supreme Court in 1991, he found with dismay that it was interpreting a very different Constitution from the one the framers had written―the one that had established a federal government manned by the people’s own elected representatives, charged with protecting citizens’ inborn rights while leaving them free to work out their individual happiness themselves, in their families, communities, and states. He found that his predecessors on the Court were complicit in the first step of this transformation, when in the 1870s they defanged the Civil War amendments intended to give full citizenship to his fellow black Americans. In the next generation, Woodrow Wilson, dismissing the framers and their work as obsolete, set out to replace laws made by the people’s representatives with rules made by highly educated, modern, supposedly nonpartisan “experts,” an idea Franklin Roosevelt supersized in the New Deal agencies that he acknowledged had no constitutional warrant. Then, under Chief Justice Earl Warren in the 1950s and 1960s, the Nine set about realizing Wilson’s dream of a Supreme Court sitting as a permanent constitutional convention, conjuring up laws out of smoke and mirrors and justifying them as expressions of the spirit of the age.

But Thomas, who joined the Court after eight years running one of the myriad administrative agencies that the Great Society had piled on top of FDR’s batch, had deep misgivings about the new governmental order. He shared the framers’ vision of free, self-governing citizens forging their own fate. And from his own experience growing up in segregated Savannah, flirting with and rejecting black radicalism at college, and running an agency that supposedly advanced equality, he doubted that unelected experts and justices really did understand the moral arc of the universe better than the people themselves, or that the rules and rulings they issued made lives better rather than worse. So in the hundreds of opinions he has written in more than a quarter century on the Court―the most important of them explained in these pages in clear, non-lawyerly language―he has questioned the constitutional underpinnings of the new order and tried to restore the limited, self-governing original one, as more legitimate, more just, and more free than the one that grew up in its stead. The Court now seems set to move down the trail he blazed.

A free, self-governing nation needs independent-minded, self-reliant citizens, and Thomas’s biography, vividly recounted here, produced just the kind of character that the founders assumed would always mark Americans. America’s future depends on the power of its culture and institutions to form ever more citizens of this stamp.

Critical Praise for Clarence Thomas and the Lost Constitution

“Myron Magnet has written a fascinating and provocative study of what he calls the ‘Lost Constitution,’ seen through the prism of Justice Clarence Thomas’s jurisprudence, which the author sees as a way to retrieve it. Written for the lay reader, this brief volume makes a compelling case for originalism. With the light it shines on culture, character, race, and liberty under law, though, the book is about more than just Clarence Thomas and originalism, in the same sense that Moby Dick is about more than just whaling. A great read.”

“In Myron Magnet’s splendid account, sensational and learned by turns, the Framers join hands with a jurist from Pinpoint, Georgia, and the slums of Savannah. Riveting.”

—Richard Brookhiser, author of John Marshall: The Man Who Made the Supreme Court

“Myron Magnet captures the essence of Clarence Thomas through a thoughtful analysis of his work on the Court. Thomas says what he believes, does what is right, and harbors no concern about how he will be treated by the culture for the decisions he makes.”

“Magnet is in complete command of his material and has produced a very readable gem. . . . [T]his book is a brilliant road map.”

“Magnet’s account . . . is a tour-de-force and in some ways a prediction for what lies ahead.”

“Magnet describes himself as ‘not a constitutional law professor but a writer.’ And a fine writer he is! Moreover, his knowledge of the political thought of the Founding generation and his clear grasp of case law rival that of the best constitutional law professors. . . . A splendid book about Clarence Thomas, an inspiring man and inspiring jurist.”

One thought on “Clarence Thomas and the Lost Constitution”