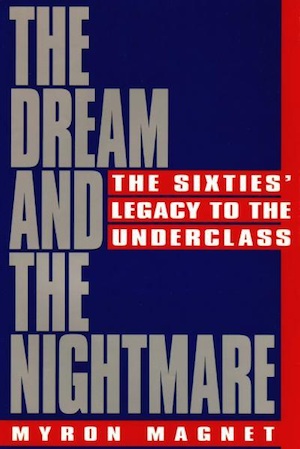 Myron Magnet’s The Dream and the Nightmare argues that the radical transformation of American culture that took place in the 1960s brought today’s underclass — overwhelmingly urban, dismayingly minority — into existence. Lifestyle experimentation among the white middle class produced often catastrophic changes in attitudes toward marriage and parenting, the work ethic and dependency in those at the bottom of the social ladder, and closed down their exits to the middle class.

“To read Magnet is to realize that the conservative critique of contemporary America is the more — indeed the only — radical critique just now.” — George F. Will

“The book of the decade … the most insightful analysis of what has gone wrong in America during the past thirty years I’ve seen.” — Mona Charen

“It is rare for a single short book to cast such penetrating light on the world in which we live that it instantly becomes an indispensable guide to the outstanding question of the day … The Dream and the Nightmare is a work of this extraordinary kind.” — Hilton Kramer, The New Criterion

“An absorbing tale of how the honorable intentions of liberal do-gooders produced tragic consequences. It is also at heart a profoundly optimistic book … Many writers have addressed this topic in recent years but few have done so with more wisdom or more passion than Mr. Magnet.” — The Wall Street Journal

“This superbly written and well argued book should stimulate discussions across the breadth of the political spectrum.” — National Review

“It is a superb book, thoughtful and impassioned.” — Irving Kristol

“The Dream and the Nightmare by Myron Magnet crystallized for me the impact the failed culture of the ’60s had on our values and society.” — President George W. Bush

One thought on “The Dream and the Nightmare: The Sixties’ Legacy to the Underclass”