Liberation and its Discontents

The sexual revolution of the 1960s made a large promise: if we just let go of our inhibitions, we’ll be happy and fulfilled. Yet sexual liberation has made us no happier and, if anything, less fulfilled. Why?

These remarkable essays, drawn from the pages of the celebrated quarterly City Journal by its editor Myron Magnet, tackle the question head-on. As Modern Sex‘s authors show in moving and often eloquent detail, sex today is increasingly mechanical and without commitment — a department of plumbing, hygiene, or athletics rather than a private sphere for the creation of human meaning. The result: legions of unhappy adults and confused teenagers deprived of their innocence, on their way not to maturity but to disillusionment. 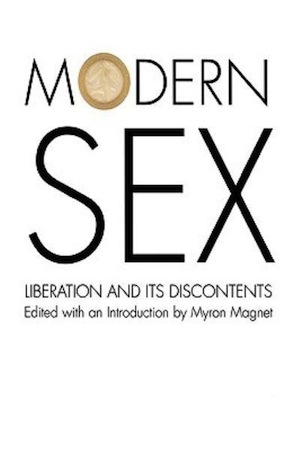 “What you see after all the coupling is a profound sadness,” writes Myron Magnet in his Introduction. Sex educators have turned sex into technique; the hygienists have promoted sex as recreation. Our children have become sexualized earlier and earlier: today, one in five American kids has become sexually active before the age of fifteen. Teenage mothers proliferate, and the mistrust between men and women that saturates the ghetto pervades the rest of society as well.

As the reports in Modern Sex tell us, the beginning of wisdom lies often in realizing that what we are doing is not working, so that instead of doing more of the same we should be doing less. These beautifully written essays — on subjects ranging from the TV show Sex and the City to teen sex to the eclipse of the manly ideal to the benefits of marriage — add up to the deepest, most informative appraisal we have of how and why the sexual revolution has failed and how we might begin to reconstruct the relations between the sexes in ways that reconcile freedom with humanity.

“Fascinating … controversial, to say the least, and quite captivating.” — ForeWord Reviews

“A compelling and original collection of essays … it deserves the widest possible audience.” — Kevin White, author of Sexual Liberation or Sexual License?