A Better Plan than Today’s

Undoubtedly the United States needs a liberal and welcoming immigration policy, geared to the needs and interests of the nation. In this urgent new book, three astute observers argue that we have lost control of our southern border, so that the vast majority of our immigrants are now illegal Mexicans. Poor, uneducated, and unskilled, these newcomers add much less to the national wealth than they cost the taxpayers for their health care, the education of their children, and (too often) their incarceration. The Immigration Solution proposes a policy that admits skilled and educated people on the basis of what they can do for the country, not what the country can do for them. 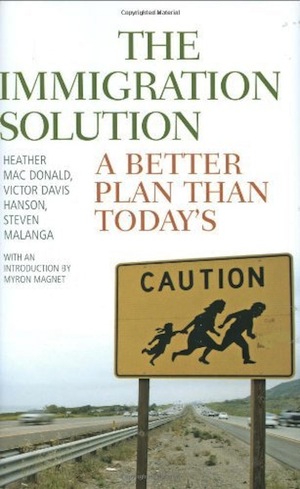 By Heather Mac Donald, Victor Davis Hanson, and Steven Malanga
Edited and with an Introduction by Myron Magnet

Heather Mac Donald is author of The Burden of Bad Ideas and Are Cops Racist? and lives in New York City. Victor Davis Hanson’s most recent book is A War Like No Other; his syndicated column appears in newspapers throughout the country. He lives in Palo Alto, California. Steven Malanga’s most recent book is The New New Left. He lives in New Jersey. All three are contributing editors of City Journal.

“The Immigration Solution is a cogent analysis of our illegal immigration crisis and the public policy choices facing America. This book is a critically important read for our elected officials and the citizens they should be representing.” — Lou Dobbs, anchor and managing editor, Lou Dobbs Tonight

“The Immigration Solution demolishes open-borders myths and provides a clear, sane path toward an immigration plan that benefits America and adheres to the rule of law. Heather Mac Donald, Victor Davis Hanson, and Steven Malanga battle muddled amnesty, advocates with impeccable logic, facts, and principle. This book is not just a must-read. It’s a must-do.” — Michelle Malkin, author of Invasion

“In this book, the writers from City Journal again show why that magazine is so indispensable. Having helped change conventional wisdom on the urban problems of crime and welfare, they have now taken a hard look at an issue even more suffused with sentimentality and cliche. The Immigration Solution is essential reading for anyone seeking to develop an informed opinion on this vital national issue.” — Mark Krikorian, executive director, Center for Immigration Studies

“The divisive debate over immigration is going to continue for some time to come. Mac Donald, Malanga, and Hanson lucidly present their concerns over the current direction of immigration policy and offer more than a few suggestions for change. Even if you disagree with their preferred policy changes, their suggestions are serious, provocative, and worthy of careful thought—and, regardless of your ideological background, you might actually find yourself nodding more than a few times as you read through the book.” — Dr. George Borjas, Robert W. Scrivner Professor of Economics and Social Policy at Harvard University’s Kennedy School of Government, and author of Heaven’s Door: Immigration Policy and the American Economy

“The Immigration Solution is not just another book about the catastrophe caused by millions of illegal aliens flooding our country; it is a call to arms combined with an outline for a sensible immigration policy. If every member of Congress would read this book, we might be able to begin the process of securing our borders and reducing the number of illegal immigrants within them.” — Congressman Tom Tancredo, R-Colorado

“The Immigration Solution is an excellent new book that discusses illegal immigration without the political rhetoric, spin, demagoguery, and unsubstantiated claims that have become all too common in the media and among politicians. It was written by three scholars at leading think tanks — Heather Mac Donald and Steve Malanga of the Manhattan Institute and Victor Davis Hanson of The Hoover Institution at Stanford University. Unlike many other scholars, they know how to write so that the general public can understand what they are saying.” — Thomas Sowell, Real Clear Politics

“Excellent summary of the state of economic, sociological and historical play in the immigration debate.” — Peter Brimelow, The Washington Times, 1/1/2008