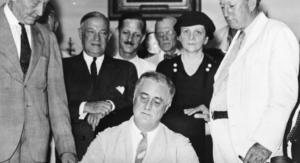 But, though the traders and Tea Partiers didn’t quite understand it, the federal government long ago had turned from the shield of individual liberty into a vast engine of redistribution. That transformation could occur because the Framers’ Constitution was body-snatched by the doctrine of the “living constitution,” which—as Woodrow Wilson first formulated it—saw the Supreme Court sitting as a permanent Constitutional Convention, making up laws as it went along, heedless of the 1787 scheme’s checks. Franklin Roosevelt’s New Deal used Wilson’s doctrine as a license to remake America’s economy and society. Once the Supreme Court buckled to FDR’s threat to pack it and started voting his way, the justices allowed an utterly foreign governmental structure to devour the Framers’ republic from within, until it broke out of the shell as something altogether different. END_OF_DOCUMENT_TOKEN_TO_BE_REPLACED

Reparations for slavery, you say? Well, we tried that experiment, in the $20-plus trillion spent on welfare, Medicaid, housing, and food stamps for the mostly minority poor since Lyndon Johnson declared his War on Poverty in 1964. As Amity Shlaes shows in her cautionary Great Society: A New History, those trillions only made matters worse. As the clamor swells to compound LBJ’s mistake, Shlaes provides a sobering postmortem, dissecting how and why, when government presumes to reshape society, the result is likely to be gory.
It took LBJ a lifetime to learn that lesson, and he learned it the hard way. He began his government career as an ardent New Dealer, first as a tireless functionary charged with pressing Texas farmers to limit their crops, on Franklin Roosevelt’s cockeyed theory that overproduction caused the Great Depression, and then as one of FDR’s most energetic congressional lieutenants, ramming through New Deal programs—many of doubtful constitutionality. He firmly believed that the New Deal had heroically wielded the power of the federal government to defeat the slump, though as Shlaes showed in her earlier best-selling book, The Forgotten Man (2007), it only prolonged it. END_OF_DOCUMENT_TOKEN_TO_BE_REPLACED

Myron Magnet
Liberty or Equality?
The Founding Fathers knew that you can’t have both.
Spring 2014
With the fulminating on the left about inequality—“Fighting inequality is the mission of our times,” as New York’s new mayor, Bill de Blasio, summed up the theme of his postelection powwow with President Barack Obama—it’s worth pausing to admire anew the very different, and very realistic, modesty underlying Thomas Jefferson’s deathless declaration that all men are created equal. We are equal, he went on to explain, in having the same God-given rights that no one can legitimately take away from us. But Jefferson well knew that one of those rights—to pursue our own happiness in our own way—would yield wildly different outcomes for individuals. Even this most radical of the Founding Fathers knew that the equality of rights on which American independence rests would necessarily lead to inequality of condition. Indeed, he believed that something like an aristocracy would arise—springing from talent and virtue, he ardently hoped, not from inherited wealth or status.

In the greatest of the Federalist Papers, Number 10, James Madison explicitly pointed out the connection between liberty and inequality, and he explained why you can’t have the first without the second. Men formed governments, Madison believed (as did all the Founding Fathers), to safeguard rights that come from nature, not from government—rights to life, to liberty, and to the acquisition and ownership of property. Before we joined forces in society and chose an official cloaked with the authority to wield our collective power to restrain or punish violators of our natural rights, those rights were at constant risk of being trampled by someone stronger than we. Over time, though, those officials’ successors grew autocratic, and their governments overturned the very rights they were supposed to protect, creating a world as arbitrary as the inequality of the state of nature, in which the strongest took whatever he wanted, until someone still stronger came along.

In response, Americans—understanding that “kings are the servants, not the proprietors of the people,” as Jefferson snarled—fired their king and created a democratic republic. Under its safeguard of our equal right to liberty, each of us, Madison saw, will employ his different talents, drive, and energy, to follow his own individual dream of happiness, with a wide variety of successes and failures. Most notably, Federalist 10 pointed out, “From the protection of different and unequal faculties of acquiring property, the possession of different degrees and kinds of property immediately results.” That inequality would be a sign of the new nation’s success, not failure. It would mean that people were really free. END_OF_DOCUMENT_TOKEN_TO_BE_REPLACED